Let’s talk about one of the principles for sustainable success that we follow at Alpha Rock Capital: being frugal. and managing debt cautiously. Also about another key factor in achieving and maintaining financial success: knowing when to borrow money.

I just finished reading Shoe Dog, by Phil Knight, the creator of the brand named after Ancient Greece’s goddess Nike.

In that book he narrates the story of how what he calls his “Crazy Idea” ended up becoming something very tangible. Not just a few athletes ended up wearing his shoes, but millions of people use all kinds of apparel that show the “Swoosh”, one of the most iconic logos in the world.

That story shows a triumphant outcome after lots of hard work and perseverance. What some may not notice is the tremendous amount of luck that was also needed to make it possible.

The book narrates how the company struggled financially for, at least, its first 16 years of existence. Phil Knight was obsessed with growth, consistently increasing year over year sales at an impressive rate. That was possible, though, thanks to a completely unreasonable money management strategy. Not only all their revenue was continuously being reinvested, but that company was as indebted as banks allowed it to be.

He tells in the book how on several occasions banks told him “enough is enough” and got rid of him as a client. He also tells us about some situations in which his company could have been bankrupt if it wasn’t because of some fortuitous event.

It could be worse, at least that company probably was making money even though it had cash flow issues. There are many other companies that spent many years burning enormous amounts of money before becoming profitable.

Those cases may seem very encouraging, but are extremely misleading. Do those companies show the path to be followed, or just some of their decisions should be copied? Should companies obsess over growth at any cost, and, eventually, hopefully, someday, maybe, they start making some money?

We hear about the success stories, but rarely about the failures. Nobody writes about the failures. The only failures you may read about are those from companies that somehow “won” and then they “surprisingly” failed spectacularly. Survivors are in many cases those that have played Russian Roulette many times and have been lucky enough not to lose yet. Yet.

Is that the only possible path? For Alpha Rock Capital, and me personally, there’s another possible approach, diametrically opposed, which is way more likely to bring and maintain success.

It consists of running finances conservatively and generating profit now. This is not valid just for companies but for individuals. Personal finances follow the same rules as business finances. The only small difference is that you can more easily sell part of your company’s future earnings (equity) than of your personal ones.

The man who moves a mountain begins by carrying away small stones.

Frugality, a principle to sustainable success

The more efficient you are with your resources, the less you need to generate a certain amount of income, the better. There are mainly three benefits to this.

The less you spend, the more money you can invest (after leaving some reserves).

I’ll try to illustrate this with a simple example.

Mr. Spendthrift is the owner of Carpe Diem LLC. He manages his company like his finances, he only saves 10% of the money he makes, spending the other 90%.

Mr. Frugal, owner of 77 Generations LLC (he’s kind of long-term oriented), on the other hand, also approaches his company’s finances like his personal ones, and just spends 25% of what he makes. That leaves 75% of the return to be invested.

This is how their capital grows over ten years: 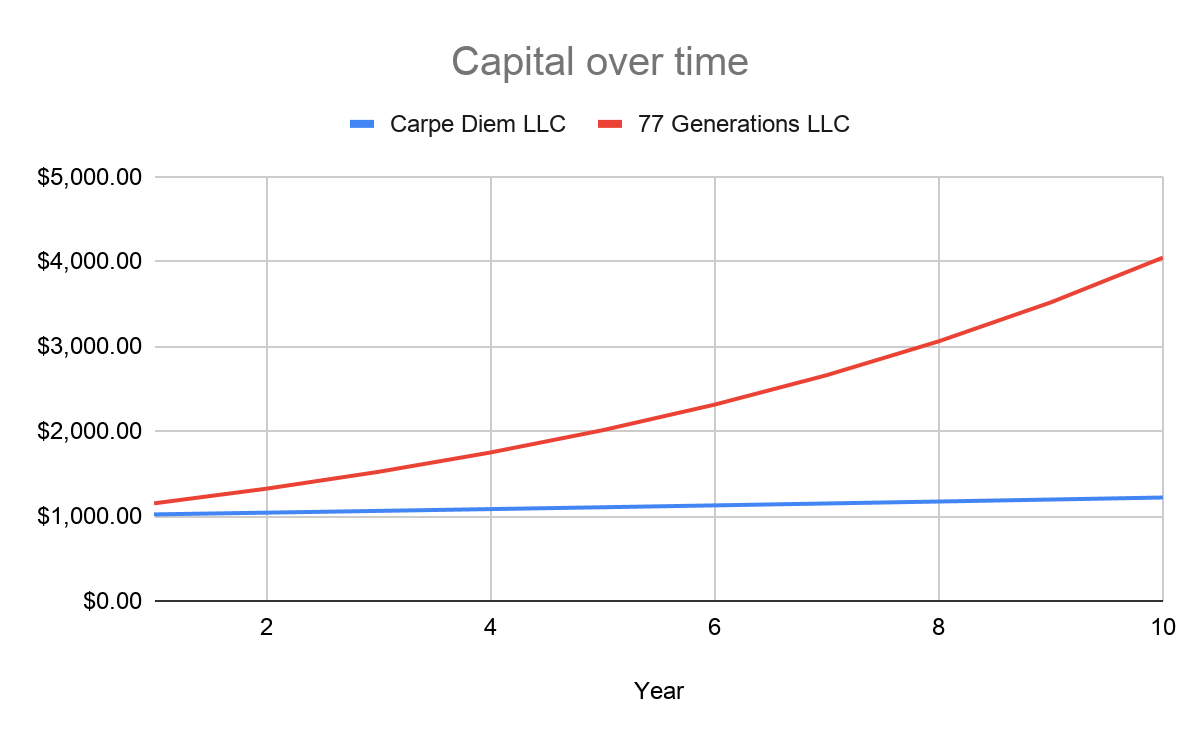 The lower your expenses to income ratio is, the bigger an income drop has to be to make you lose money. If you spend 75% of what you make, just decreasing income by more than 25% will mean that you start losing money. If you spend just 25%, you’ll need an enormous drop of 75% for that to happen.

You have higher expected returns the more frugal you are, and there are two reasons for this.

First, because, when things go wrong, those that spend more than they earn have no other choice than selling part of their assets. Meanwhile, even though you are also making less money, you still have some to invest, and can do so at lower prices than under normal circumstances.

Second, because your robust finances allow you to make highly profitable investments that won’t pay out until many years from now, while others can’t afford to wait so much.

There’s actually a fourth benefit, which only applies to companies.

If you prove that you are able to run finances responsibly, that you look for ways to be both productive and efficient, it’s more likely that someone is going to trust enough in you to invest some of their hard-earned money in your company. If you combine this with the previous benefits, growth can be monumental.

So being efficient not only makes your capital grow faster, but it makes you way more robust.

Adding Debt into the Equation

What’s the point of borrowing money? Borrowing money allows you to make more money when things go well, at the expense of increasing your volatility and risk of ruin (and your sleepless nights). Never risk what you can’t afford to lose to, maybe, win what you don’t need.

Before taking any decision, the first questions that should be asked are:

After this, you should try to think about all the possible outcomes and the probability of each of them happening, to see if it’s worth changing anything.

Only seldom borrowing money is a good choice. Not being able to pay back shouldn’t put you in a catastrophic situation. So one of the first conditions is that you must be able to truly hedge the negative scenarios.

how to PROPERLY figure out the risk of debt

Let’s go back to Mr. Frugal. He’s considering getting a loan for his company. Someone offers to lend him $1,000 at 10% annual interest, to be returned 1 year later in just one payment. So, if everything goes well, if he borrows money, one year later he would have $1,300 instead of $1,200, as he pockets the difference between the 20% return and the 10% interest. Free money!

Well, that’s not how the real world works. First let’s ask the key question: What happens if he can’t pay it back? In this case, he would lose his company, that’s the collateral of this loan.

What if he takes a more cautious approach and he just borrows 200$? Then he would need to be able to pay back more than 98.36% of the time.

Those are very high percentages. To justify borrowing money, he needs to be sure the probability of not being able to pay back is very small. And that’s ignoring the stress that having debt can cause, even during times when the cash flow situation seems good.

So, in summary, I think success stories like Nike, Amazon or Walmart, can be inspirational, but you have to think about which things made them possible. And which of them you can realistically duplicate.

Extreme leverage is going to potentially increase profits. But it entails risks that are very rarely justifiable. Good investment opportunities are of no use if you don’t save money or are constantly on the brink of financial disaster. There’s only a sure path to riches: savings as much as possible and investing the surplus in the most productive way.

Do the thoughts shared in this article align with your perspective on investing? If so, please reach us via our contact section.

Also, if you are interested in knowing more about Alpha Rock Capital and the FBA acquisitions space, I suggest you check our monthly newsletter.